In conversation with Dr Charles Bennett, Learning Manager at the BBC Singers, Garth McArthur discussed the history of the BBC’s unique in-house professional choir; writing and bringing librettos to life as well as the challenges and excitement of producing the Angry Planet Prom.  Garth also gave complimentary BBC Singers CDs to the audience gathered.

Finally, Alan Smith was joined by Alistair Fruish (Writer-in-Residence at HMP Leicester) and Steve Gadd (The Anne Frank Trust) to reflect on the rewarding but tough realities of teaching in prison.  Alistair reminded the audience that the Writers in Prison Network has undergone substantial funding cuts, and Steve told audience members about the experience of Holocaust survivors speaking in prisons.  For while a central aim of the Anne Frank Trust is to promote empathy and tolerance and while recognising the enormous historical and circumstantial differences, Steve also suggested that for many prisoner’s these visits by survivors acted as a stark and hopeful reminder that rebuilding life after incarceration is a possibility. 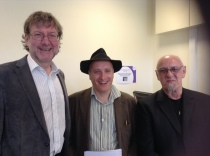 My thanks go out to all our speakers and audience members who made these talks at the University of Northampton School of the Arts such a success.  As an additional treat, please find attached an Angry Planet commemorative booklet designed by illustrator and long-time Charles Bennett collaborator, Diane Griffiths.  Charles will be distributing this booklet as part of his visit to Summer Fields School, Oxford on Friday 28th July.