Conference report: ‘Narratives of difference’ in the global marketplace

On the 25th and 26th of October 2012, the Centre of Contemporary Narrative and Cultural Theory in the School of Arts at the University of Northampton, in partnership with the Spanish University of Vigo, hosted the international conference titled ‘Narratives of Difference’ in the Global Marketplace. 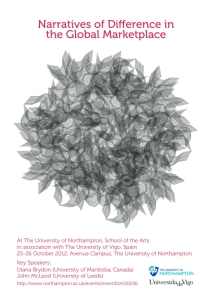 The conference analysed and delved into the notions of ‘difference’ and ‘diversity,’ more specifically, into their commodification in the production and reception of culture through different narrative strategies and/or modes of narrativization. This topic, which directly relates to that of the international project ‘Globalized Cultural Markets: The Production, Circulation and Reception of Culture in the Global Market Place,’ based at the University of Vigo, attracted renowned scholars and many postgraduate students from the two host universities and other British universities, such as Brighton, Queen Mary, University of London, Goldsmiths, University of London, Leicester, Warwick, Manchester Metropolitan, Edge Hill, Aston and Newcastle, and continental universities such as Aveiro and Minho (Portugal), Zaragoza and the University of the Balearic Islands (Spain), Chemnitz and Münster (Germany), Teramo (Italy), Ege (Turkey), Alexandru Ioan Cuza of Iasi (Romania), King Khalid University (Arabia Saudi) and Laurentian University (Canada).

Professor Diana Brydon, from the University of Manitoba, and John McLeod, from the University of Leeds, were the keynote speakers. Prof. Diana Brydon opened the conference with a fascinating and stimulating keynote lecture entitled “Reclaiming the Global Sphere,” in which she offered a thorough examination of the indigenous imaginary of hauntology as reflected in Thomson Highway’s Kiss of the Fur Queen and Kim Scott’s That Deadman Dance. She warned against a commodifying read of the other as Other, and highlighted the transformative possibilities that an open embrace of, and dialogue between, different forms of knowledge should have. She has generously uploaded her paper on her webpage (http://dianabrydon.com/2012/10/09/reclaiming-the-global-sphere-2/). On the second day of the conference, Prof. John McLeod offered an insight into his upcoming book on transcultural fictions of adoption. In his inspiring keynote lecture, titled “Decolonising Adoption,” he observed that a discourse of rescue and race usually underlies and justifies imperialist modes of adoption. This discourse seems to be supported by the traditional representation of the figure of the adopted as a symbol of loss. However, he remarked that, in the works written by some authors, such as Hannah Pool and Jackie Kay, this figure could also be interpreted as a source of alternative and unsettling forms of affective/ affiliative bonding.

A wide variety of topics was tackled in the several sessions that followed the two keynote lectures. The main theme of the conference was approached from an interdisciplinary perspective. Speakers drew attention to the ethical concerns which the increasing marketing of pain, the multicultural, the postcolonial, and the stereotyped Arab woman raises, to later on discuss the various narrative strategies introduced to deal with these issues. Each of the sessions led to thought-provoking discussions whereby inspiring and fascinating links between the different themes of the papers were established. Some of the debates focused on the limits between trauma and shame, the dichotomy perpetrator/victim and questions of identity, marginality and authenticity. Motherhood and the depiction of women in popular fiction also attracted the critical attention of delegates.

The book launch of Zoe Brigley Thompson’s latest poetry collection, Conquest, was another remarkable event of the conference. The poet read from this and her first collection, The Secret, and the audience greatly enjoyed the lyrical power of her words.

All in all, this was a very successful, informative and stimulating conference, which allowed for many lively debates. The convenors, Professor Janet Wilson (Northampton) and Dr Belen Martin-Lucas (Vigo), gratefully acknowledge the support of Santander funding made to the School of Arts, in hosting this conference and in assisting five postgraduate students from Zaragoza and Vigo to attend.

Researcher Developer for The Graduate School, University of Northampton.
View all posts by Simone Apel »

Posted on November 22, 2012, in Conferences, Events, School of the Arts and tagged Arts, conference, Janet Wilson. Bookmark the permalink. Leave a comment.