On Friday 26th July 2013, I was fortunate to join Dr Charles Bennett and Bob Chilcott, internationally renowned choral composer, for the World Premier at Worcester Cathedral of their latest collaboration.

Read on for further details and an audio recording of Charles Bennett’s talk.

Bennett and Chilcott’s piece ‘Five Days that Changed the World’ was primarily performed by four national and international choirs: the Ozarenie Chamber Choir (Russia), DO_RE_MI Children’s Choir (Austria), Communidad de Madrid Youth Choir (Spain) and the Worcestershire Young Singers (United Kingdom), although the piece was also written so that all the young singers could participate in its final rendition.  The performance jubilantly brought to a close the Gala Concert of the First Worcester International Festival for Young Singers (WIFYS), which also featured Ateliers by conductors Carlo Pavese, Margret Boasdottir and the electrifying Sanna Valvanne.

Before the concert, Charles Bennett gave a talk on the process of writing ‘Five Days’ and his collaborations with Bob Chilcott.  The ‘Five Days’ that Bennett selected for celebrating key events and pioneering discoveries were: ‘Thursday 29th March 1455: The invention of printing’; ‘Friday 1st August 1834: The Abolition of Slavery’; ‘Monday 14 December 1903: The first powered flight’; ‘Friday 28th September 1928: The discovery of penicillin’ and ‘Wednesday 12th April 1961: The first man in space’.

In drawing a contrast with their earlier collaboration, ‘Angry Planet’ performed at the BBC Proms (August 2012), Bennett noted that ‘Five Days’ was more positive and less melancholic,  a recognition of the fact that, “Sometimes human beings get it right”. Bennett also observed that ‘Angry Planet’ and ‘Five Days’ were connected by the fact that they both involve young people and that it is always uplifting to “…see young people really enjoying themselves”.  When Bob Chilcott was asked why he works with youth choirs, he commented that he loves to help young people to sing as well as encouraging them to develop a love of language.

He continued that he enjoys young peoples’ openess to new musical ideas and their instinctive approach to singing. Artistic Director of the WIFYS Festival, Malcolm Goldring added that the main theme of this international event was to promote peace and unity between nations. He also praised Bennett and Chilcott for writing, “…so well for young people” and said that the singers “loved working on” ‘Five Days’.

The openess to new ideas cherished by Chilcott was very much on display throughout the Gala concert, which also featured youth choirs from Belgium, Hong Kong, Germany, Lithuania, the Czech Republic and Poland. Carlo Pavese’ s Atelier embraced fractured, anarchic sounds inspired by Dadaism, while conductor Sanna Valvanne’s joyous physicality was clearly infectious.  However, for all the fun to be had this was also an event that used song to tackle serious issues, with Boasdottir’s rendition of ‘Be Like the Bird’ touching on the experience of cancer and Valvanne’s interpretation of ‘Hope for Resolution’ addressing Apartheid. 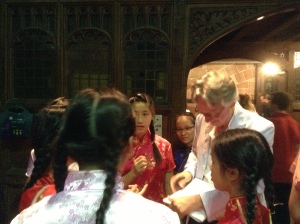 The concert culminated in a moving and rousing rendition of ‘Five days’. Audience member Carys Clarke enthused of Chilcott and Bennett’s piece, “Amazing compositions, amazing voices and brilliant idea”, while Maggie Holloway said that she enjoyed, “Everything conducted by Sanna Valvanne and particularly ‘Five Days that Changed the World'”. Atmospherically framed by alters, stained glass windows and medieval tombs, Chilcott’s energy, the Atelier’s youthful voices and the sacred arches of Worcester Cathedral brought the wonder of Bennett’s ‘The first man in space’ to life: “I saw how beautiful our planet is. Seventeen thousand miles an hour. They thought I might go mad.  But I saw the face of God.”